Note:  This is the eulogy I wrote and read at my grandfather's funeral.  I've strived every day for the past three years to put these words into action.  I hope you are able to do the same! 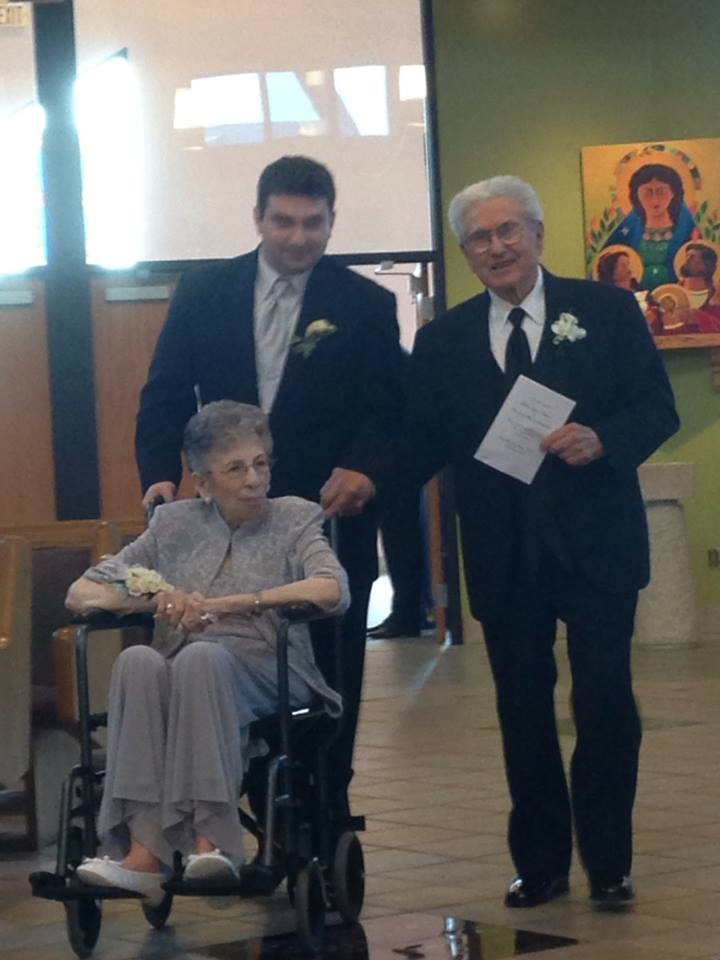 Good morning. For those of you who don’t know me I’m Cosimo’s grandson Gregory.

I don’t know how many of you ever talked to my grandfather on the phone, but if you did, it probably went something like this:

I’d call over the house and say “Grandpop, it’s Greg.”

He’d reply “Gregory, how we doing?”

His response without fail would be “Good, here’s Grandmom” and he’d hand the phone over to my grandmother. This whole conversation would last 7 or 8 seconds. And that would be the extent of our call most weeks.

It’s no wonder that a few years ago, he told me that he wanted a eulogy that’s short and to the point.

My sister Stacy, my cousin’s Jennifer, Andrea, and Stephanie and I were extremely blessed for two reasons.

First, we had the greatest grandfather a grandchild could ask for.

And second, we understood this while he was here with us. Far too often, a person doesn’t realize what they have until it’s gone. But the five of us, and later our spouses Bryan, Frank, Lyndsay, and Ted, knew every day exactly what he meant to us and what we meant to him.

Grandpop was giving, understanding, compassionate, thoughtful, funny, creative, laidback, care free, full of life and the list could go on and on.

But instead of describing grandpop to you, I want to take this time to share with you the greatest gift my grandfather gave me.

That way you can share it with your children, grandchildren, nieces, and nephews and grandpop will always have a presence in our lives.

When I was a young boy about 6 or 7 years old, I used to take the bus home from school. The bus always passed by my house on its way to the stop. The best days came when I would look out the window and see my grandparent’s car parked outside of my house.

This usually happened on Tuesdays and I always knew I was in for a good time that afternoon.

It always started the exact same way. My grandfather’s trunk was always full of junk. And every Tuesday afternoon, he’d let me dig through his junk to see what I could find. The neighbors probably wondered why a 6 year old boy wanted to dig through a trunk full of junk, but he had me believing I was a pirate digging for treasure.

I always wound up with a handful of quarters or a tennis ball or something I could play with.

We’d stand about ten feet apart and throw the ball at each other… without gloves. He thought that if I learned how to catch a baseball with my bare hands, I’d have no problem catching one with a glove. This happened for the first 30 minutes of our catch with each throw getting progressively harder.

The secret, he told me, was when the ball was coming at you, draw your hand back like you’re catching an egg. That way it won’t hurt.

Thinking back on it, I’m glad my teachers never asked what I did the day before. Answering with “grandpop put me in the trunk of his car then threw a baseball at me while I wasn’t wearing a glove” probably wouldn’t have sounded as good as it was. But make no mistake I had a blast.

When my cousins, sister and I would visit my grandparent’s house, grandpop would take us down the basement with a bucket of water and a paint brush and we’d “paint” the walls with the water. We didn’t use colors or anything like that, just water.

Picture this, there would be puddles of water on the basement floor. The walls would be soaking wet. Our clothes would be drenched. And my grandfather would laugh hysterically and tell us how good our “paintings” were.

All we did was make a mess, but he made us feel like we were Picasso painting beautiful landscapes.

On the nice days, grandpop would spend hours with Stephanie, Stacy, and I throwing fly balls over the power lines for us to catch, or taking us to the lakes to feed the ducks.

And on Sundays in the fall, he would sneak Stephanie and I into the vet to watch the Eagles play. Our family has three tickets- one for grandpop, and one for each of his son’s Ralph and Cuz. When we were younger, my dad and uncle would carry us up to the gate, give the ticket collector the three tickets, and before he could count them, we’d run inside.

Stephanie and I would be scared to death we’d get caught.

As we got older, having catches, digging for junk, and painting walls gave way to talking about school, coming to our games, and being endlessly curious about our lives.

The other day, I was down his basement and found a framed newspaper clipping of Stephanie. He absolutely loved going to Steph’s games and watching her play ball.

From Stacy’s first day as a freshman in pharmacy school, he was asking her about pills. He was proud of Stacy, but I think he saw having a pharmacist in the family as a great convenience. Grandpop had a fascination about what each pill did… and he was always asking her if there was a generic version he could get cheaper.

And when my cousin’s Jennifer and Andrea had children, they were all he talked about. Undoubtedly, within five minutes of a conversation with him, he’d always say “Marissa and Nicky were here yesterday” or “We saw Jessica and Giana the other day.” And his face would light up.

I used to get a kick listening to him talk about his great grandchildren because it brought back so many memories. He was playing the exact same games with them as he did with us.

Later on in life as my grandmother’s health began to fail, he made sure to be with her as often as possible. He played golf or went food shopping in the morning before she woke up. He stopped going to football and baseball games in order to be with her.

We used to beg him to get out because we knew he was getting antsy, but he always refused.

Wednesday December 5th started out like every other day, but it wouldn’t end like one. That was the day we found out my grandpop’s cancer had spread and he wouldn’t be with us much longer.

My mom said that he had 30 days left, maybe two months if we were lucky.

All of a sudden, time had new meaning for me. I didn’t want to think about tomorrow because tomorrow meant I’d have one less day with grandpop.

I wanted to live today. Make the best use of ﻿﻿today﻿﻿. See ﻿him ﻿or talk to him today.

You see, this is the greatest gift my grandfather ever gave me. Connecting the dots between my memories and the way I felt on December 5th, I finally learned what he knew all along: How to prioritize the time you have today, because you can never get this time back.

Far too often we find ourselves using the word tomorrow, as in “I’ll call my parents tomorrow” or “I’ll play with my kids tomorrow” or “I hate Mondays, I can’t wait until tomorrow.”

Luckily for all of us, my grandfather had his priorities in order. He was never too busy to show his grandson how to catch a baseball with his bare hands, or to throw fly balls over the power lines, or ask his grandchildren about their day.

There was never something more important on TV or in his life than to watch one of our games. He knew how to enjoy his life and still put those he loved first.

He knew he could get on with the work, chores, or whatever he had to do later, but he knew he’d never be able to get back the time he spent with us.

He understood that staying at home, taking care of his wife, and watching an endless cycle of cowboy movies was more important than any baseball game or football game.

He knew time with her might be limited and wanted to spend as much of it with her as possible. There would always be another game to go to if he wanted.

On December 5th we had 34 tomorrows left to spend with grandpop. I’d give anything to have one more talk with him today.

So many of you have come up to us and asked if there was anything you can do.

The truth is, yes, there is.

When you leave here, call a loved one and ask them “how we doing”, teach a game to your children, grandchildren, niece or nephew, or simply cherish a few moments with a spouse or friend.

Do this today. Not tomorrow. Today.

That way you can share in the greatest gift my grandfather ever gave me.